This week I’m thinking about Mary and three spiritual practices that may help us prepare for Christmas.  You can read the first in the series here  and here if you want.

I’m not good at the practice of silence and solitude.  I like chatter and hustle and bustle because they feel productive.

Silence and solitude, at least from a distance, seem well, lonely and unconstructive. Like  waiting for a bus you’re not sure is coming.

However, though it’s not my go-to mode, over the years I’ve grudgingly come to experience great value in the discipline of being alone and quiet with God.

When I look at the account of the first Christmas, it’s not that there wasn’t chaos, confusion, and noise.  “The little Lord Jesus, no crying He makes”??  Are you kidding? 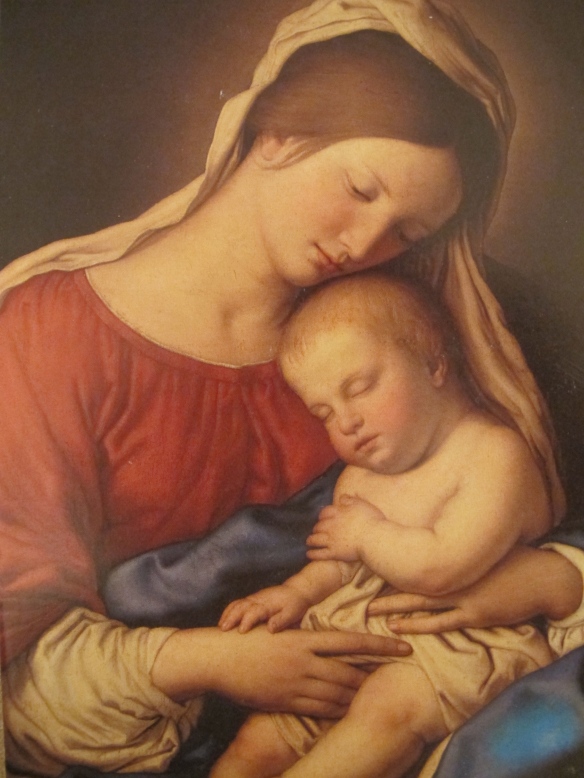 That song clearly was not written by anyone who’s ever been a mother!  Jesus was fully God on earth, but He was also fully human.  Which means fully baby, which means noise and spit up and dirty diapers and maybe colic.

Add to that noisy animals, as in roosters crowing, goats bleating, cows mooing and the noise of people working, washing, baking, selling…

Then you throw in a bunch of shepherds who were probably poor teenage boys, smelling like the sheep with whom they’d been sleeping.  I’m thinking of the 17-year-olds I know.  Not exactly a quiet, contemplative bunch.

So it’s not that Christmas wasn’t loud and bustle-y, but I see hints that in the midst of that there was a value on stillness and reflection with God also.

Mary wasn’t the only one who was pregnant that first Christmas.  Elizabeth was too, and she “remained in seclusion” for five months.

Mary, after visited by the shepherds “treasured up all these things and pondered them in her heart.”  (Did she take advantage of Jesus’ nap time or did Joseph mind the baby while she took a walk in the fields?)

Throughout Scripture we see some who choose silence but then, there’s Zechariah who had silence thrust upon him.

This seems to be important to God.

“Be still and know that I am God”*

“In quietness and trust is your strength.”*

Other disciplines feel less discipline-y than the choice of silence and solitude for an extrovert like me.  So it’s usually something I have to schedule in for it to happen, but sometimes an opportunity pops up that I need to respond to.

Last week a friend who’s a professor at Northwestern College invited me to come and lead a discussion with one of her classes.  I had prepared, and I had prayed, but when I arrived a few minutes early, didn’t go directly to her office.  I opened the huge doors, and slipped into the empty chapel with soft lighting and stained glass windows to               Just. Be. Still.  With God.

And in those few minutes He impressed on me something I would have missed otherwise.  A distinct prompting regarding what I should say to the students.

It was a gift.  But a gift I easily could have missed.

Sometimes there’s the whisper of God, but mostly silence and solitude brings a change of perspective.  Right-sizing my problems, my fears…a settling down because I’m reminded who is in control. And, less comfortably, bringing sin to mind.

I like the picture Ruth Haley Barton paints of this spiritual practice, comparing it to a jar of river water.  When it sits still the law of gravity causes the sediment to eventually settle to the bottom so that the water becomes clear.  “When we sit quietly in God’s presence, the sediment that is swirling in our souls begins to settle.”*

When Zechariah was given his voice back the first thing he did was to praise God.*  Was this a direct result of his silence?  Was silence such a powerful experience for him that he chose it afterwards?

What might you choose today in order to respond to God’s invitation to be still alone with Him?  Take a walk in the snow (without headphones), turn off your car radio during your commute, slip into a chapel, light a candle…?

* Check out Ruth’s book, Invitation to Solitude and Silence

I'd love to hear from you and others will be enriched by your thoughts! Share here and continue the conversation. Cancel reply